The main objective of the European Castles Institute - an organisation of the German Castles Association (Deutsche Burgenvereinigung, DBV) – is (according to its statutes) “to promote research on historic fortifications and residential buildings and to disseminate these results”. 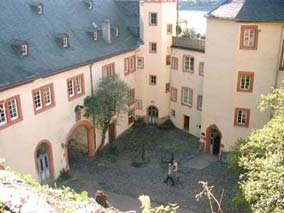 This short passage of the Institute’s statutes comprises a variety of activities.
Since its establishment in 1899, the German Castles Association (DBV) has been committed to protecting castles, palaces and manors and to initiate research on them.
The activities of the Institute focus on castles as a phenomenon of medieval history. It engages with complex research questions and analyses them in both interdisciplinary and international contexts.
The Institute is concerned to organise connections between circles of experts and the dissemination of latest research results for further investigation. It organises academic conferences, seminars and study tours.
Towards the end of 1999 the Institute moved to Philippsburg Castle. So the Institute and its scientific commission are now equipped with rooms on their own.
The Institute’s library – containing approximately 30.000 books - boasts an extremely wide and diversified range of literature on castles, medieval history, history of art, studies about garden landscaping and chronicles of journeys, myths and legends.
It also accommodates 125 up to date journals as well as other documents, plans of ancient monuments, photos, post cards, videos and CD-Roms.
The Institute cares for their continuous extension, service and development.

The use of the library is not limited to the members of the German Castles Association (DBV), but it is open to the public. As a special service it provides information for enquiries on research or related issues.

Furthermore, the Institute publishes selected research results from conferences and scientific congresses in the following series of journals, on behalf of the German Castles Association:

The organisation co-operates closely with institutes and organisations in Europe which have similar objectives.
Over the last few years the organisation has initiated several European projects among them the database "EBIDAT".